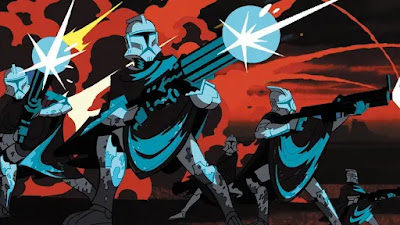 I was born in 1980. If you do the math, that means that I didn’t have any realization of what Star Wars was until all the movies were over. I grew up during a period where there was nothing new outside of the Droids and Ewoks cartoons. Those were huge disappointments, as all I wanted was to see lightsaber duels and big battles. When those shows wrapped up there was nothing. It was complete and total silence from the Lucas camp. After the release of the original Power of the Force figures died down it seemed that the toy lines were shuttered. Not a peep was made after. Sure, there would be television airings and VHS collection releases, but nothing new was coming out.

The 1995 THX VHS collection was magical to me. By then I was a bit older, a teenager now, who was still obsessed with these three movies and the ideas of magic and wonder from this universe George Lucas created. I had collected figures, playsets, old marketing materials, and original soundtracks on vinyl. These new tapes weren’t adding anything new. The sound and visuals were cleaned up, and they were light years ahead of what I had been watching, three VHS tapes recorded from HBO in the late 80’s. What I loved most here were the Leonard Maltin interviews with George Lucas before every tape. Here I got a glimpse into the mind of the man who created Star Wars. I took in every word and marveled over what he said when reflecting on his greatest achievement.

Little did any of us know that this THX release would open up the floodgates of a tidal wave of new Star Wars material. The blitzkrieg that followed included a new line of Power of the Force action figures, the multimedia project known as Shadows of the Empire, and the Star Wars Special Edition theatrical re-release, followed by a new VHS box set.

All of this, we would later realize, was a testing ground for the biggest announcement to come out of Lucasfilm in over a decade, a brand new trilogy of movies. The world then became over-saturated with Star Wars: Episode I: The Phantom Menace merchandising. Star Wars was officially back. 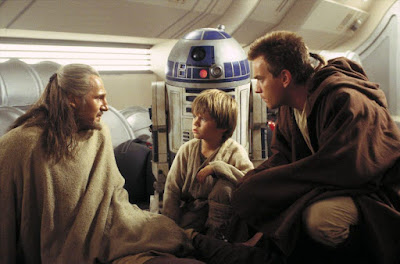 Then the movie came out and it completely took the wind out of my sails. I saw Episode I in theaters on release day. However, I hated it so much I declared that I was done with the franchise. I was 18 and more interested in Attitude Era WWF and going on dates with women. Star Wars seemed too kiddy to me. It just wasn’t for me anymore. Then Episode II came out and I didn’t even bother seeing it. I was completely checked out of anything Star Wars. I was 21 and living in a brand new city. I had limited free time, and I spent a lot of it sitting in Yahoo chat rooms and Internet message boards.

A couple of years later I slowly started getting back into Star Wars. I picked up a copy of Knights of the Old Republic and played that. I enjoyed it so much that I watched Star Wars: Episode II: Attack of the Clones. Then I started reading more of the books. That’s when a friend introduced me to something I didn’t think I would ever enjoy, an animated Star Wars show called Clone Wars. 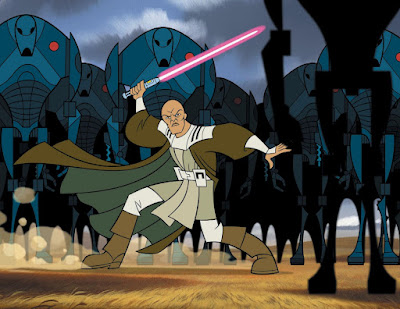 There was something magical about this show, something that the two prequels so far lacked. As my father would say, “those movies didn’t have any oomph.” The show was daring. It took crazy risks, venturing down avenues the movies wouldn’t dare cross. The creators were given carte blanche to do whatever they wanted with it. Some of it seemed a bit ridiculous, like Mace Windu taking out an entire droid brigade without a lightsaber. If this were possible the Battle of Geonosis would have been over much earlier.

Each episode was around three minutes long, but they were three minutes of sheer amazement and wonder. The animation was so beautiful that it holds up to this day. Some episodes had very little dialogue. They didn’t need it. Space battles, lightsaber fights and ground assaults were what my tiny brain yearned for at the age of six. I wanted this instead of Ewoks hanging out on Endor, or C-3PO and R2 fighting The Great Heep. We also got to see other Jedi do battle who weren’t named Skywalker or Kenobi. Kit Fisto, Shaak Tii, Aayla Secura, and Voolvif Monn all made featured appearances on this show. This was the first time I’d seen anything like that on screen. Sure, they’re all covered in the books, but A. no one read those, and B. they aren’t necessarily visual. Asajj Ventress was my new favorite character. She was a self proclaimed Sith assassin who longed to become the apprentice to Count Dooku. She was tasked with killing Anakin Skywalker, even though Dooku and Palpatine knew this was an exercise in futility. After a really long and visually stunning battle, Ventress failed. But she became such a memorable character that they brought her back for other projects, including the 2008 series where they rectonned her origins.

Other things shown in this series were the knighting of Anakin Skywalker, and C3PO getting his gold plating. It was said that since he was in the service of a Republic senator he should look more presentable. The show also further explored the cloak and dagger-ness that Anakin and Padme had to employ in order to keep their marriage a secret. This was completely opposite to the Star Wars Episode III: Revenge of the Sith where they are just openly living together and it seems like everyone knows. 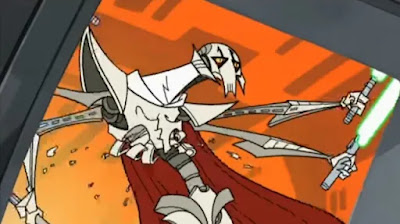 This show made me fall in love with Star Wars again. I was diving deep into a lot of material at this time, and I was reading a lot of old and current (at the time) books. This included the newest book Labyrinth of Evil. which was said would finish right at the moment Revenge of the Sith would start. Oh, my, did that book deliver! It introduced a new character in General Grievous, and involved a plot to kidnap Supreme Chancellor Palpatine.

Then season 3 of Clone Wars began and it was taking the same beats as the book. Oh, my! It was so good. It even shows the tail end of the book where Mace Windu force crushes General Grievous before he takes off with the chancellor. This was also the reasoning behind Grievous having a bad cough at the beginning of Revenge of the Sith. I actually got very annoyed when they retconned this in later seasons of 2008’s Clone Wars. He’s coughing throughout the whole show!

I camped out overnight to get tickets to Star Wars: Episode III: Revenge of the Sith. Sure, online ticketing was already a thing, but I always felt camping out was a rite of passage for any true Star Wars fan. This may still be the case, as I heard of people camping out for Star Wars: Episode IX: The Rise of Skywalker.Nevertheless, it was a thing I had always wanted to do, but something I never got to do until ROTS. This movie was probably the best of all the prequels and a solid entry into the Star Wars saga. 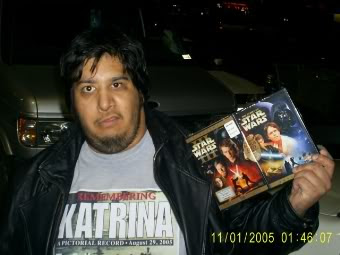 For me none of it would have happened if not for how good Clone Wars was. Yes, I was already back into Star Wars before I saw it, but Clone Wars helped reignite my passion for the franchise. I purchased the Revenge of the Sith DVD at a midnight release at Wal-Mart. While it wasn't a crazy or insane gathering, there were a few people there in Jedi robes and dueling lightsabers.

I'm 41 now and still love Star Wars, even though Disney has done their best to butcher it. I don't keep up with the books as much as I did before, but that's only because there are so many coming out at such a rapid fire pace. I've attended a few Star Wars museum shows and I'm always ready when a new video game or show comes out. I still love the franchise and one day I'll visit the Star Wars Galaxies thing at Disney. I found out recently that Disney Plus now has the 2003 Clone Wars show available to watch. I'm happy, because it's so good, and so many people should really watch it at least once in their lives. The Ewoks and Droids show are also on there, but we're not gonna talk about those. Ha.