A Possible Possession in Queens 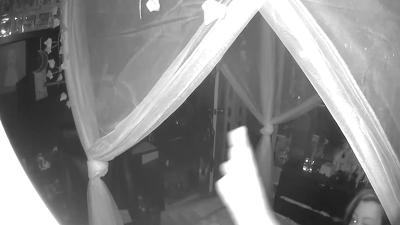 Nikki M. is a licensed paranormal investigator out of Queens, New York. She is a live streamer on the Twitch platform where many people watch her and participate in her haunted streams. Nikki owns three haunted dolls and she has her viewers communicate with them through her various ghost hunting devices. When she isn’t doing that Nikki is playing Call of Duty or streaming the popular ghost game Phasmophobia. She also loves pro wrestling, loves making cool crafts, and absolutely loves coffee (She even has her own special blend that she sells through her online store).

However, when the lights go out and it is time to sleep, Nikki enters a completely different arena. For the past few years, Nikki has been in the company of an entity or entities in her home. It started as a mystery. She and her family began waking up to strange scratches on their bodies that were not there the day before. Then things escalated to items falling off shelves, her dogs barking at corners of the wall, sightings of ghost orbs, red eyes in the middle of the night, and changes in mood brought on by the spirits that reside in her house. While some might call it poppycock, I am of the belief that a spirit can put such a strain on a person and take hold of them that they fall into a depression, or begin having attacks of anxiety.

Recently, things escalated even further in Nikki’s home, as larger items began falling, such as her family’s grandfather clock. Ever since all this started, Nikki has kept a recorder going at night, along with a WiFi night vision camera wedged into a corner of her bedroom. Both the camera and the recorder have captured sounds that are extremely eerie. I will play some of these recordings and explain what they are. To explain what might have brought this on, Nikki believes that keeping her haunted dolls out of their cases might have brought out these sounds.

Sound 1 starts with Nikki M's sleep meditation clip restarting on its own. The ambient sound is a mix of a fan blowing in her room and the possible rumbling of a far off subway train. Where things get more interesting, outside of the meditation restarting, is around the :48 second mark where you hear a random "Thwack" out of nowhere. The house doesn't have pests or rodents, so there is no way that was a rat in her room. This one could be explained away, but in the next clip you hear it more frequently, and a bit louder.  Sound 2 has three separate instances of an unknown noise, besides the ambient sounds and the meditation clip.

By sound 3 the meditation has stopped. However, as the train is passing by you could hear somewhat of a low gurgle or groan, or maybe even speaking. I realize this also could just be noises coming from the train, but it sounds evil.

Sound 4 was an hour long and I haven't had time to sit and sparse through the whole thing. Sound 5 was not included in what I received, but I believe it's because it's labeled differently in another clip I have. This is Sound 6. As far as I can hear there is only one instance of a strange sound, a lone thwack after the train passes. I hear a "wooo" near the end, but I believe that's part of the train. New York is a very noisy city. Judge for yourself, see if you can hear something I cannot.

Sound 7 has a rumbly woosh (Not sure what that was), and a thwack, followed by what sounds like a crunch. It sounds like someone trying to tip toe very quietly and then crunching something on the floor.

Sound 9 is almost complete silence, all except one moment when we hear that crinkling again.
This final sound is a bit of a head scratcher. You'll hear sounds at the :26 second mark, what sounds like someone getting out of bed and grabbing at the microphone. Nikki told me that her recording device is on her desk, far from her bed. I'm thinking whatever was walking around her room had finally gotten bold enough to check out that thing on her desk.

Finally, at some point during the night the meditation clip began playing again, and you can hear a very creepy guttural groan. Like, what the hell is that? After this, Nikki, in a different video I won't share, woke up and started waving her arm at her camera and swatting the air, trying to catch anything that might be either in her face or in the air. I would do the same in her shoes. Remember, it is pitch black in her room at that moment.

I, a layman, cannot explain what is happening in her room. Nikki says it could be a demon trying to possess her. I say it could just be the spirits in her house misbehaving. When I moved in with a friend many years ago his house was supremely haunted. One of the ghosts was a little girl, and she would spend her time during the night clicking the medicine cabinet open and close. Strange stuff. Nikki says that she has since put the dolls back into their respective cases and does not hear anything or pick up the noises anymore on her recorder. Could it have been the dolls?

What do you think is in Nikki's room? Remember, be respectful in the comments. This may not be your bag, but at least show some respect to all those involved, please. Thank you.